I first visited Yosemite National Park twice in the late 1980’s, both times in June. I entered the park from the east and spent time in the vast, high country. Eventually I made my way west and entered Yosemite Valley. I was astounded by both the breathtaking scenery and the huge crowds.  Back then, parks such as the Grand Canyon and Zion didn’t seem particularly busy. But almost everyone that visits Yosemite at some point is going to crowd into that relatively confined valley. And that’s almost 4 million people a year these days.

Winter can be a great time to enjoy Yosemite. Unfortunately the high country roads are closed for winter. But the valley can be spectacular and far less crowded than during the summer months. Campsites are generally easy to find (Upper Pines can still be reserved, but usually some sites are available without a reservation). The snow pack can enhance the spectacular views in two ways. First, the mountains look more dramatic with some snow, as this view of the valley shows.

Secondly, the melting snow can provide large areas of pooled, still water in portions of the valley that allow for dramatic reflections that would not be present in the summer. Sure, the standing water is sometimes in roads and campsites, but it looks great in the open valley meadows. 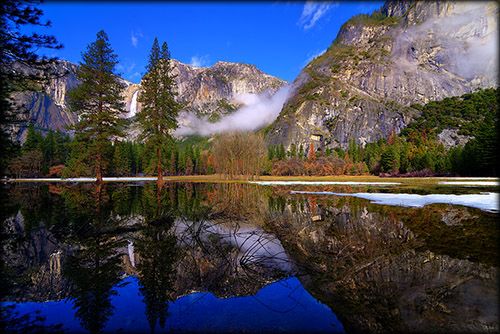 And finally, there’s Horsetail Fall… which is as spectacular a natural visual phenomenon as I’ve seen anywhere. For a few days in mid to late February, at sunset, provided there’s sufficient snow melt on a portion of El Capitan for the ephemeral waterfall to be flowing, and the setting sun hits the waterfall without being obscured by clouds, the waterfall lights up and glows as if it were falling fire. What a sight it was to watch as the bottom of the waterfall began to glow orange, and then the vivid color ascended upwards until the entire waterfall was glowing. 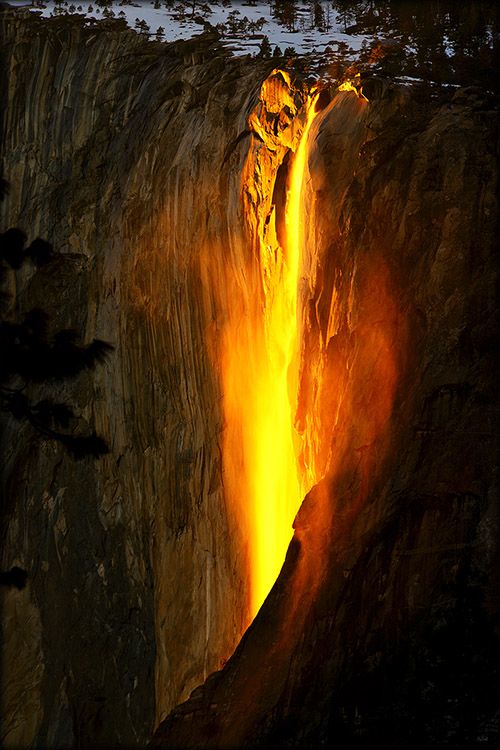 I plan to brave the crowds and do another summer visit next year. I want to revisit the high country and do some of the hikes that are closed due to snow in winter. But the winter experience definitely will be hard to top.