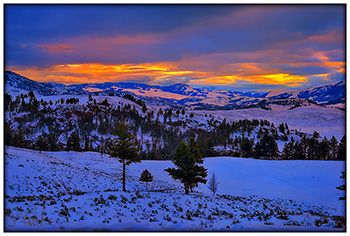 Winter can be harsh in Yellowstone National Park. Indeed, heavy snowfall means closure of most of the park roads to automobile traffic. While some animals, most notably bears, escape the harshness of winter through hibernation, many species have to adapt and endure to survive. For some carnivores such as wolves, coyotes, and foxes, the blanket of snow may provide a convenient backdrop to better spot their potential prey. For the grazing herbivores, the snow cover is an impediment to access their food.

Bighorn sheep and mountain goats are exceptionally agile and prefer steep terrain where they are safer from less agile predators such as wolves. But the steep terrain can provide the additional benefit of allowing less snow to accumulate, making it easier to access the ground surface to graze.

Bison are well suited for the long, cold Yellowstone winters. Underneath their skin is a thick layer of fat that provides insulation from the extreme cold. But they still have to graze, and accessing the ground surface isn’t always easy. So they use their massive heads to whip back and forth against the snow cover to uncover a patch of ground where they hope to graze. An individual bison will work a spot for several minutes, uncovering and eating what vegetation they find, and then move a few feet to start a new spot. As a result, their faces can become caked with snow to provide an interesting mask.

The northern section of Yellowstone National Park tends to be at lower elevations than the other parts of the park, and consequently is a bit warmer with less snow. Fortunately the road from Gardiner to Silver Gate is the one road plowed to stay open during winter. The towns of Silver Gate and Cooke City depend on it for access. As a result this northern stretch is a great place to conveniently observe the winter wonderland that is Yellowstone during the snowy months.

I spent a couple of days along this northern stretch last week. The campground at Mammoth Hot Springs remains open in winter, although few people choose to spend those long, cold nights camping in the elements. I was one of three campers there my first night, and four on the next. The days are short, but there’s lots to see. At dawn, most of the wildlife seem a bit surprised to see humans, as if they know we are much less well-suited for that environment. By mid-day, the animals are fairly used to people staring at them, since such co-existence has become a routine part of their lives.

Below are two exclusive limited editions from my recent trip. The first is a massive bison at dawn, with a face encrusted in snow. He was lying down where he’d slept for the night, and not quite ready to begin another day moving snow to find food. The second shot is a coyote slinking through the snow looking for prey. Coyotes can’t compete for the same habitat as wolves, so they often are close to the road which wolves generally avoid. After I’ve processed more images from the trip, and completely thawed, I hope to go back for a couple more days (and nights). 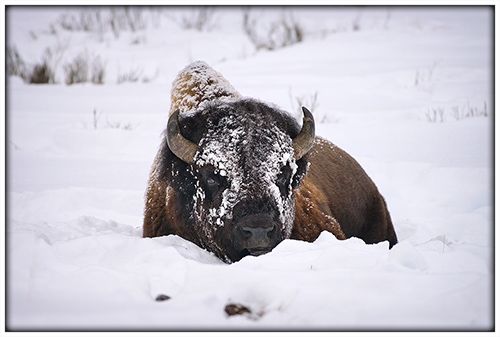 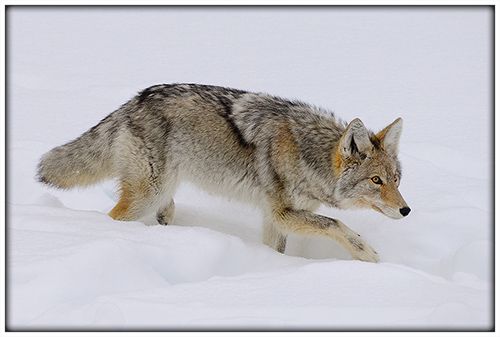 On the Prowl Exclusive Limited Edition

Check out these and other exclusive limited editions here.