Canyonlands National Park in southeastern Utah receives significantly fewer visitors than most of the other Utah national parks. But the people who do go almost invariably visit one particular spot, at one specific time of day. That spot, of course, is Mesa Arch, and the time is sunrise.

In the middle of the day, Mesa Arch is quite unimposing. It’s not a huge arch like Landscape or Delicate Arches in nearby Arches National Park. It doesn’t have the unusual geometry of Turret Arch or Double Arch. What it does have is a unique glow as the first morning sunlight hits the underside of the arch on each clear morning. It also often has dozens and dozens of photographers packed around on those mornings, shoulder to shoulder, getting those shots. And of course, on multiple occasions I have been one of them.

I spent last week in Arches and Canyonlands National Parks. It’s not hot this time of year, and I hoped a winter trip would allow some shooting flexibility not afforded once the crowds have descended. Camping in the Island in the Sky district was quiet, with few visitors. There is no water in the winter. Nor is there a camping fee. One feature I was anticipating was a nearly full moon after dark, hopefully visible directly under the small arch.

Shortly before the anticipated moonrise on Wednesday evening, I took the short trek to the Arch in the dark, hoping the eastern clouds over the La Sal mountains wouldn’t interfere too much with the rising moon. I carried a propane lantern which I set up on the hill at the north end of the arch, to provide a warm light source to illuminate the red-orange sandstone. When the moon arose, there were definitely clouds that precluded clear delineation of the lunar features. But the clouds also gently diffused the moon light like a giant softbox, helping to define other features in the sky, and not so strong as to interfere with the numerous stars on an otherwise clear night. The end result is below, which I found well worth the effort. 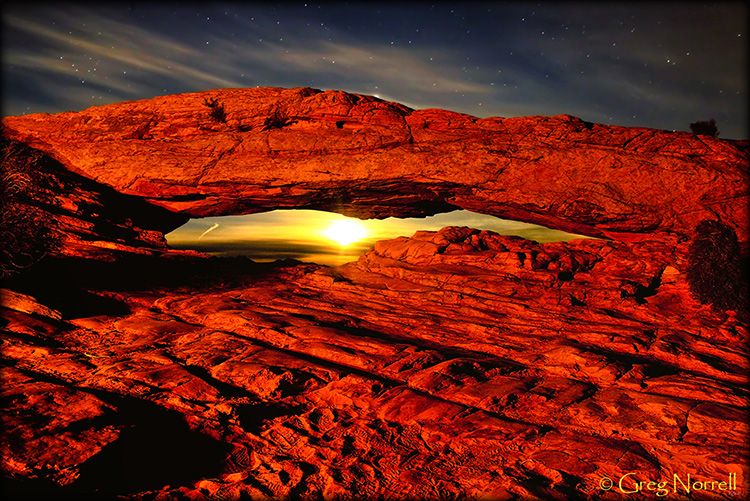